STOLEN deals with the issue of human trafficking, an issue that is hard to discuss, to accept, and to understand, but it is an issue that exists not only in Vietnamese culture, but in all cultures.

The story begins with our white lotus Tuyết, a young girl living in the countryside of Vietnam with her parents, who is just beginning to see the world around her and shape it into a place in which she belongs. But before she can even start to decide for herself, to develop her own opinions, or to define her own character, she is sold by her gambler father, trafficked into an entirely different place: slavery at a cityscape brothel. Before she can even grasp exactly what is going on, everything is stolen from her. A few flashes of her eyes and she loses everything from her family, her friends, and her virginity, ending up with no one to rely on but herself. Tuyết ends up using her life to realize a world no one could ever imagine or could ever want to imagine, and even the brothel Madam, the pimps, the police, as well as the girls who work with her are constantly trying to cover up and deny the truth in different ways, be it to each other or to themselves.

STOLEN follows Tuyết’s journey of struggles and allows for the discovery of an ugly truth, but a truth nonetheless. 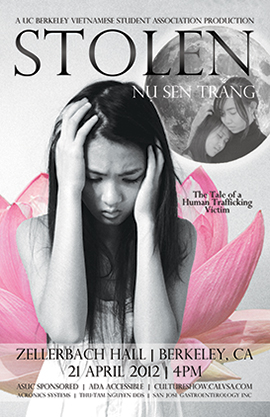